(not in any of the books)

It's January. Officially winter. It's cold. And is dark at what feels like 2pm most days. But the last bit about darkness isn't necessarily a bad thing... it just means you can see lights better :)

Currently in London town, there are two light festivals going on. Lumiere London in central London and Winter Lights in Canary Wharf.

So last night, 14 Janauary, I met @Cowfields in Canary Wharf (mainly as it's where I work) and we had a look around the Winter Lights exhibitions in the freeeeeezing cold.

And there were some lovely lighty things indeed... 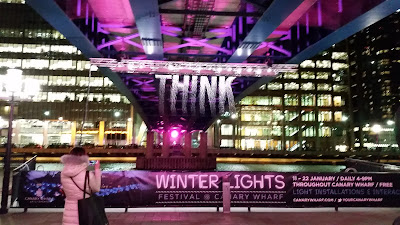 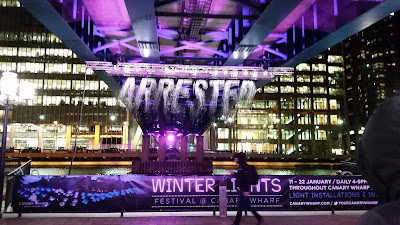 There were many words, but the only words I captured that you could actually read were Think and Arrested... thankfully Sex didn't make it! They had something similar to this (maybe even the same one) when the Olympic Games came to London in 2012. Brought back some fabulous memories.

We wondered around a bit more and found this really strange exhibit that reacted to mobile phones. It wasn't overly impressive so didn't bother with a photo. I really wanted to see the giant inflatable man, but it was a further walk away and @cowfields had already seen it on the bus, plus it was frickin' freezing. So we wondered back toward the tube station and noticed there was more stuff in Jubilee Park.

And these bits were pretty cool...


I took some photos of this one, but they didn't turn out amazing... so a video was needed instead. I stood for a while just listening (and having a little bop!) to the music and watching all the lights.

Then we wondered round and saw the multicoloured flowers - that also moved with the wind. 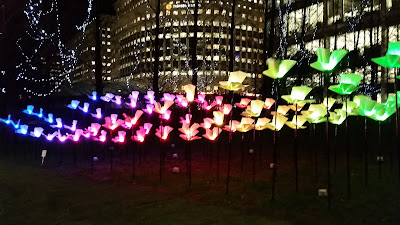 By this point, the Arctic winds of Canary Wharf were slowly killing us, so we jumped on a warm tube into town to have a look at the official Lumiere festival.

We started off in Trafalgar Square, where there was a really odd bottle exhibition in one of the fountains. I wasn't entirely sure if it was part of the exhibitions or not, so we didn't stick round for long. Although having looked at the website just now it was. 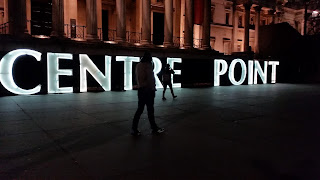 The Centre Point wording from the top of, well, Centre Point was on display. They're currently renovating it I think, so the added it as part of the festival. Pretty cool.

That was pretty much all we saw of Trafalgar Square, and we had a wonder to Piccadilly where the festival continued.

Piccadilly had some really cool floating fishes... with really relaxing Harry Potter like music in the background. This was probably my favourite thing of the festival. 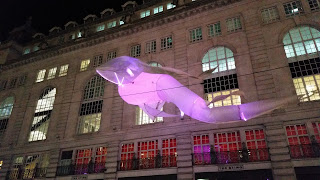 Sadly the picture doesn't make it look as amazing as it was, but I did record a little video of it, so you can get the picture :)

They were also bits in Mayfair, but as it was so cold, we decided to miss it out and cut through to Regent Street. Between Regent Street and Piccadilly, is Air Street and there is an archway adjoining the buildings either side. The road goes through the bottom, and an open space at the top. As part of the exhibitions, the open space above was closed and a moving image (with  pretty loud sounds!) of an elephant was projected. Regent Street had the front, and (unfortunately) Piccadilly had the rear. But it was pretty impressive.

By this time it was almost 9pm and we'd been walking around for aaaaages. So we did what any civilised people would do... we went and ate in China Town :) YUM!

Once we were fed, on the way back we walked through Leicester Square and noticed that there was an exhibit in there too. And it was very pretty... 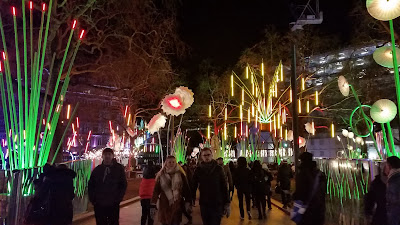 There were other exhibits that we missed out on in this area, plus there are more based in Kings Cross. Check out their website for a full list (and a map too) of all the exhibits.

But what we'd seen was pretty good. The Lumiere festival is on until Sunday 17 January, and the Canary Wharf one is on until Friday 22 January.

So if you have a free evening, go see!