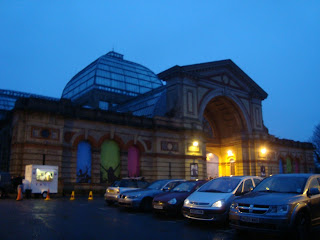 On 1st January 2012 I went to Alexandra Palace. Now although in the book it has Ally Pally down for its Ice Rink, I actually went there for the Semi-Finals of the 2011/2012 PDC Darts World Championship. 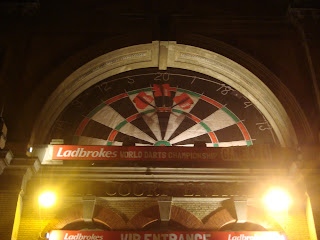 This year it was Andy Hamilton vs. Simon Whitlock in the first semi-final, and that match was followed by Adrian Lewis vs. James Wade in the second semi-final.
These were two very epic games. Hamilton won the first semi-final after being 3-1 up, then going 5-3 down, finally beating Whitlock 6-5. Lewis won the second semi-final after being 5-1 down and then coming back to win 6-5 also. So us fans got treated to a two games with the maximum number of sets - meaning it didn't finish until just before 1am!

Ally Pally has got a lot to offer including - the Ice Rink as mentioned above; amazing views across London (sadly I went at night so I wasn't able to take good enough photo's) where you can see from Canary Wharf, to the city buildings including the Gherkin and Shard, to the BT Tower; a lovely 80 acre park to walk around; a boating lake; you can even play golf! It obviously is also a great gig venue.

I do hope to go back there again, but during the day to take advantage of some of the things mentioned above. So I'll hope to do an update to this entry. I also really want to go there on Fireworks Night to watch all the fireworks across the city - I say this every year but maybe 2012 is the year I finally do that!

Alexandra Palace is located at Alexandra Palace Way, London N22 7AY and their website is www.alexandrapalace.com. It has a number of free car parks, but is also on the W3 bus route which stop outside both Finsbury Park and Wood Green Underground Stations (both on the Piccadilly Line). Ally Pally is also on Twitter, so go follow @yourallypally.
Posted by Unknown at Tuesday, January 03, 2012