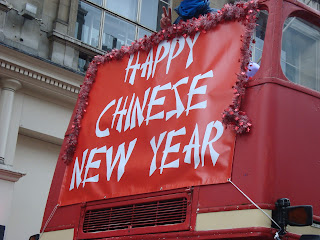 On 29th January 2012, London came together to celebrate Chinese New Year - the Year of the Dragon. Most of the roads around Trafalgar Square, Shaftesbury Avenue and Chinatown were closed to traffic so the 50,000+ people could descend to celebrate. There were two stages, the main one at Trafalgar Square and then another smaller one on Shaftesbury Avenue. A parade started at 10am, but the official ceremony started at 12pm which is the time that we aimed to get to the square for.


I met up with @londonfox and @chrisnotwell at Trafalgar Square to have a look at the festivities.   We went down into the main Square, and the first port of call was to buy a dragon. Ok, it was only a paper one, but it was very very cool.


The square was ridiculously busy (and gladly so) but the vast amount of people meant my view was... well... restricted to say the least! It's at times like this I wish I was 6'2!


At Trafalgar Square, to start the proceedings off, there was 5 minutes of firecrackers... and boy were they loud!! 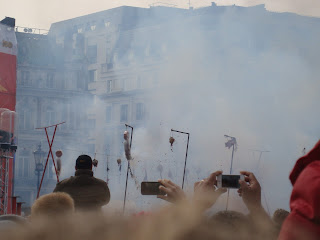 Once the noise had stopped... the picture above shows what was left... eery looking poles and lots and lots of smoke. I feel sorry for those people nearby who had no idea what was happening - I bet they thought there was some police/firearms incident!


After the firecrackers were the speeches. We heard from the likes of the Chinese Ambassador, the Mayor of Westminister and my personal favourite, the Mayor of London, Boris Johnson. I say my favourite only as I got to "boo" him - along with half the other people there. Kinda made my day!


We listened to a few of the speeches, but to be honest it was freeeeeezing cold (and they were due to go on for another 15 minutes), so we headed to the fantastic coffee shop that is Notes. This is an awesome little coffee shop that sells coffee (duh!), home-made cakes and food, wine, music and dvd's! We met friends @Annnushka and @mattlucht to have a catch-up. After our drinks, @Annnushka and @mattlucht went off their way and @londonfox,  @chrisnotwell and I decided to go into Chinatown to have a look at the various stalls and soak up some more atmosphere. Another friend of mine @paktographer was in the area, so he had a wonder about with us in Chinatown.

After having a good look around, we decided to have a wonder back to Trafalgar Square to see what they had going on. We went and stood on the steps of St.Martin in the Fields to get a better view of the stage - we decided trying to get back in the square would be a nightmare. Turns out we made a very good choice as; 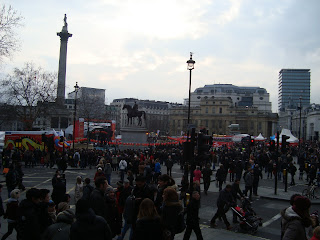 a) There were loads of people 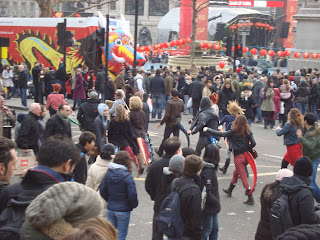 b) we saw a group of people celebrating the Year of the Dragon in their own special and cool way.


By this time it was getting onto 4pm, it was still very cold, so us 4 ventured off into Covent Garden to warm up and have a beer in the The Porterhouse (@Porterhousebars). Of course it couldn't just be any beer, I had to have a...


@paktographer went on his own merry little way, leaving @londonfox,  @chrisnotwell and I to go and get some Chinese food - I mean, what else could we possible have to end the day?!?


As you can imagine, Chinatown was still very much heaving with people, so we got the bus to Tower Bridge to possibly the best Chinese Restaurant in London - Hing Lee- to end the day.


The food is amazing, the staff are nice and we were even treated to a free Fortune Cookie...