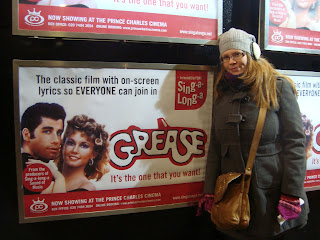 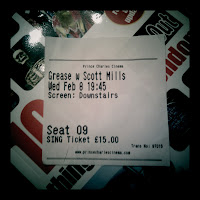 Yesterday I went to watch the Singalonga showing of Grease at the Prince Charles Cinema. 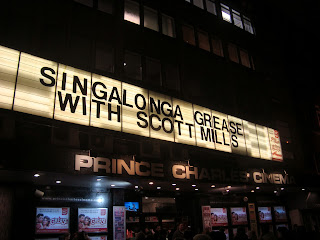 Don't ask me how, but somehow I even persuaded @londonfox to come with me! Last night was a special showing as @scott_mills (BBC Radio 1 {@BBCR1} DJ) was hosting the show.

The ticket for this show was £15, but we did get a glass of wine, some popcorn and a goodie bag for the show (you also have to remember that you're in the heart of the West End too). But I thought it was good value for money.

Once everyone was settled, @scott_mills made his entrance and gave us the rules of the night with Sandy's "sister" Randy.

Some of the crowd really dressed up, and those that did were all invited to the front to be in a best dressed competition to win some prices. 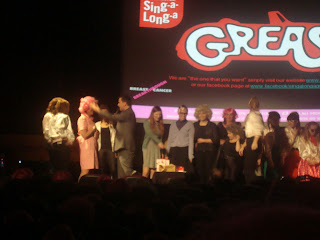 @londonfox and I didn't dress up so to speak, but she wore some leather look skinny jeans Sandy style and I had a pink vest on and a neckerchief 50's style. But we did buy some stylish wigs to fit in - for a bargain £3 of which all of it went to Breakthrough Breast Cancer. 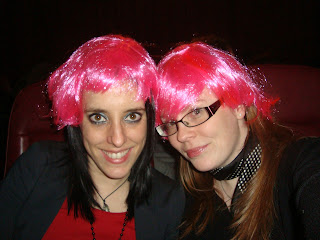 Now after that was all done, it was time to watch the film. Well, sing-a-long and heckle/cheer/boo to the film. As you expect every time one of the songs came on, the words would appear on the screen with styles individual with each song.
Now, onto the goodie bags. We used the tissues for a couple of sections, but one of the main sections was "Hopelessly Devoted to you", where we waved them about. 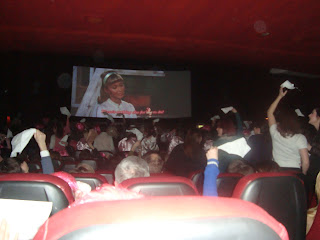 Then the paper bags. We used these for when "Beauty School Dropout", they went onto our heads and they instantly made us look like the girls... 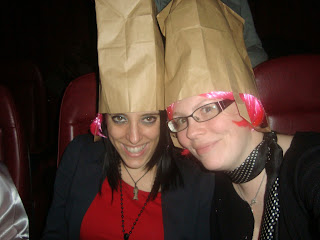 But luckily, everyone in the crowd did the same thing. Phew 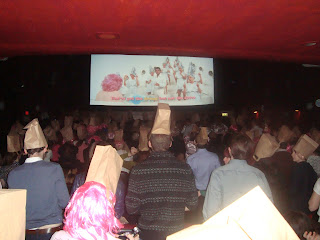 Then we used the balloons during "Blue Moon", blown up but not tied as when Sonny and gang mooned at the cameras during the of the dance, we all let them go. 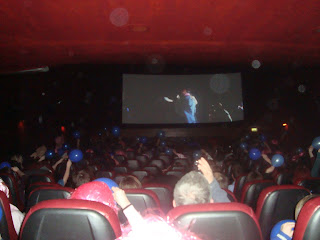 We used the tissues a bit more, and then used the party popper at the end of the film when the whole gang is back together. Aaaaah.

And then the inevitable happened... the film ended. Boo. But we did finish it on a massive singing high. I apologise now to your ears all when you click on the video below...

And then it was over. Sigh. But I did get to meet and have my photo done afterwards with @scott_mills - yay! The first celebrity on my blog! Ok, probably the last too...but hey. It's actual Scott Mills! Awesome. It was only brief chat, but he asked me if I enjoyed it and admitted that it was the first time in 10 years he'd seen it. A nice guy indeed.


Ok, now I have a little confession. My book actually mentions going to see "The Sound of Music". And don't get me wrong, I do like that film too, but I though this would be a better film and having a celebrity there was even better!

So here are the details; the Prince Charles Cinema is based at 7 Leicester Place, which is just off of Leicester Square. Their website can be found here and are on Twitter @ThePCCLondon. They are the only independent cinema in the area, and they have some really awesome films showing - an example being them showing all the Alien films in one go. Excellent. As I said at the beginning of this blog, this showing was done by the awesome people at Sing-a-Long-a, you can find their website here and they are also Twitter too @Singalonga. They do shows all up and down the country - including Grease, Sound of Music, an Abba Tribute and one of my favourite films of all time, Rocky Horror. Am so doing that one next...
Posted by Unknown at Thursday, February 09, 2012