Two weeks ago I did a post about letting my delightful readers to decide what I should do next on my blog. (If you missed that post you can have a butchers here). Looking back, I fear that may have been a mistake and one I'm not sure I will do again... mainly because you're all an evil bunch!

In the end, you guys voted for me to go here today; 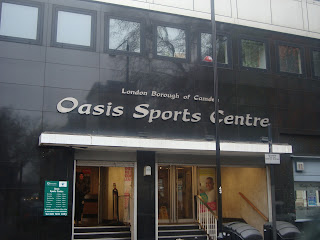 Now it doesn't seem too daunting from the outside, a nice enough building for a leisure centre. But you guys voted for me to have a little swim... IN AN OUTSIDE POOL. 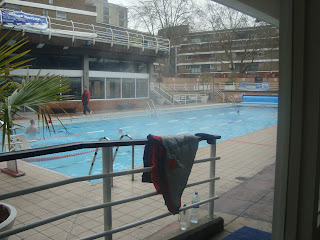 Hope you can all see the steam rising from the pool from where it was so COLD outside. I checked my phone just before I got into the pool and it was a slightly chilly -1. Brrrrrgh. Luckily for me the pool was heated to 27 degrees so it wasn't such a shock for me once I got into the pool. But getting from the changing room to the pool is a whole other story...
I was actually very surprised at the number of people stupid enough to be swimming outside. On my way there, I had fears that it would just be lil' old me as the only person crazy enough to swim in the outside pool. But no, some people actually do this through choice! Weirdos. There is an indoor pool too which the more sensible people among us went to.
I'd forgotten what swimming outdoors was like. I swam lots in an outdoor pool when I went camping as a child with the Girl Guides. Funny how you block out the leaves, dirt and bugs that can get into the water. Now don't get me wrong, the pool wasn't dirty in the slightest, but there are just somethings you can't prevent getting into such an open pool. I had a couple of frights when I'd touch something weird in the pool, but thankfully they were only leaves. Phew.
If I'm honest, my plan was to get in, swim a couple of lengths and get straight out again as I wasn't sure how my body would cope. But I'm glad to say that I was in there for just over half hour and ended up doing my usual 32 lengths (which is 0.54 miles). Awesome. This pool is slightly bigger than the pool I go to at 27.5m (my usual pool is 25m, as is the indoor pool here). After that I obviously had to get out... boy that was cold. Cold cold cold cold cooooold. Brrrrrrgh again. Apparently the temperature had risen to an almost summerly temp of 3 degrees. I didn't feel that in the slightest... felt much more like -3!

Now I know you're probably all asking where is the proof that I actually did this. Sadly I don't have any, you're all just going to take my word for it! I went on my own (surprisingly no one wanted to come with me), and I did ask a member of staff if they would be able to take a photograph of me - but it was against company policy and they couldn't. But honestly I did swim!
Not gonna lie, as I was waiting for the bus in the cold I was cursing each and everyone of you who voted for me to do this. But... I'm actually glad you did as I really enjoyed it! Twas a bit fresh I'll admit, but I would definitely go back there for a swim. Perhaps just in the sunshine next time. Yup. Sunshine sounds good. May even try and get some others to come with me. I am sure it would be a much more popular idea in warm weather. 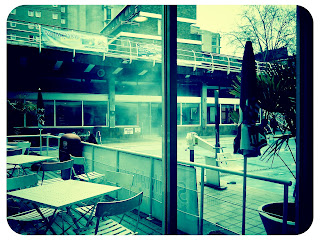 Ok... so where is this pool I can hear you all asking. It's pretty much based in between Tottenham Court Road and Holborn just off of High Holborn. As the Oasis Sports Centre is managed by GLL, I was able to use my Swim London card - this allows me to use 40 different pools across the captial. But I think it's about £4 a swim for non members. If you fancy a swim there, the address of the leisure centre is 32 Endell Street, London WC2H 9AG and you can find their website here.