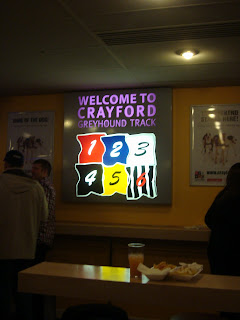 I won't lie, the book mentions Wimbledon Stadium to visit and "have dinner at the dogs". And as you can clearly see from the picture above I went to Crayford Stadium instead. Once a year I go here to celebrate one of my good friends birthday and this year I went on 10th March 2012. 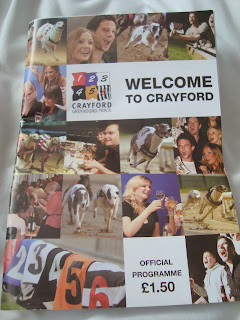 This is the birthday boy @payno_uk himself... 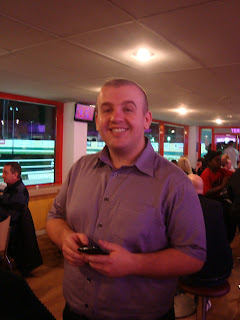 So before I left for the evening at the dogs, I rolled a dice to pick out my 3 dogs - I got dogs 2, 3 and 4. For easy of gambling (or laziness to you and me), I had the same dogs all night with a reverse forecast bet. I was a bit crazy betting a whole 50p per dog, so all in all I handed across £36 of my hard earned cash to the nice cashier lady.

So, how did my dogs do I hear you cry out! Not that great, but not terrible either... I managed to get two race wins - Race 4 with dogs 4 (Sparta Glee) and 2 (Shelbourne Satin) and Race 7 with dogs 2 (Capoola Lad) and 4 (Golden Silver). 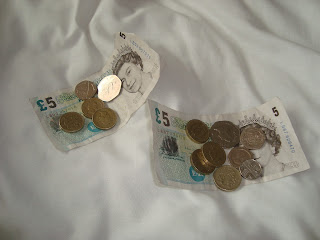 And these were my lovely winnings! It was only just over £18, but that was half my betting money back so it wasn't too bad.

Poor @payno_uk didn't have quite the same luck - the dogs he picked didn't win a single race. Boo... did no one tell the dogs it was his birthday?!?! His brother @johnny_9s however managed to get race wins in 7 out of the 12 races and was £100 up on the night at the end. No fair!!! The dogs in trap 6 were the ones to have that night, and jammy @johnny_9s had it.

They mention Wimbledon in the book as it is the only dog track left inside London (there were 30 at one point) but Romford and Crayford are mentioned as they are technically in the Greater London area.

As I am an East London gal, there were only ever 2 greyhound tracks for me - at my beloved Hackney Stadium (now completely demolished and part of the Olympic site) and Walthamstow (which is still there sitting empty). But I do still love an evening at the dogs and although Romford is probably closer to me, I've still never been and Crayford is my greyhound home as most of my friends live out that way.

So if you fancy a night of fun, giggles, some gambling and hopefully some winnings too, go and spend an  evening at the dogs. It costs £6 to get into Crayford Stadium which includes a progamme, and their address is Stadium Way, Crayford, Dartford DA1 4HR. Crayford train station is literally round the corner for those coming in from afar like me (although I drove). You can find them on Twitter @crayforddogs and like them on Facebook if you so wish.
Posted by Unknown at Wednesday, March 14, 2012