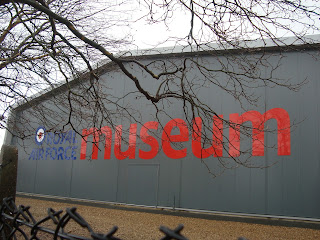 On a wet and windy Sunday 4th March 2012 @paktographer, @londonfox, a very excited @chrisnotwell and me (@tadders) ventured waaaaaaay up north on the Northern Line to the RAF Museum in Hendon. I do love a bit of history - esp WW1 & WW2 - but I'll be honest, I don't know much about planes.

Holy crap it was massive. Much much bigger than I thought.

The first hangar we walk into is this, I didn't know what to look at first - so many different planes! 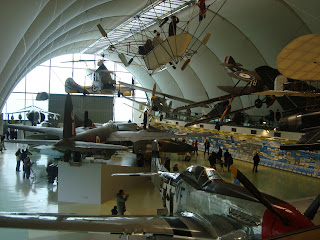 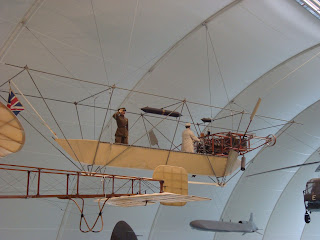 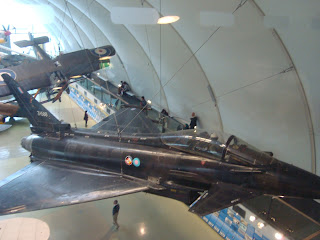 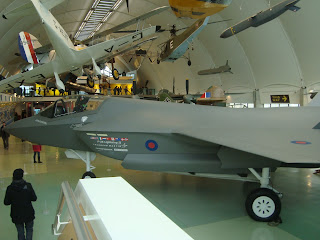 Myself and @paktographer managed to keep up with @londonfox and @chrisnotwell for the top level of this hangar, but then we lost them. @chrisnotwell  (and @londonfox too) were too excited and wanted to look at everything. As I've said before on here, I'm one of those people who like to read everything... and that takes time!

They had a timeline along one of the walls (if you look at the top photo of the 4 above, you'll see a line of blue and yellow rectangles along the right of the picture - it was that) which was very interesting. It was from the first fight up until 2003 when that hangar opened. You wanna know out of all that history the one thing I remembered? In 1932 the first Mars bar was produced in a small factory oop north. Yup, nothing to do with planes whatsoever. 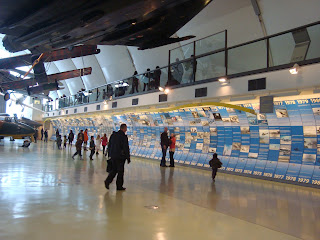 Ah, I'd written all that description and then realised I'd taken a picture of the wall. Duh. So this is the wall with all the information. On the top of the information is a yellow line, that shows the exact distance that the Wright brothers flew on the very first flight. Not very far in distance terms, but incredibly far in aviation terms!

Now onto the next hangar...
As you walk into the hangar, there is a wall dedicated to Remembrance Day. I'll be honest, I'm quite a emotional girl and by the time I'd read the different placards (was about 6 or 7 of them) I was in tears. I could never go out and fight for my country like our Army, Navy and Royal Air Force do, but I know that I owe my freedom to them. Past and present. 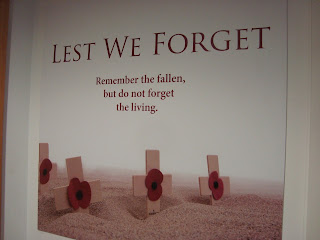 Even now I can find myself getting emotional. Eek.

Once I'd wiped away my tears (hoping that no one saw), it was time to wonder around the big boys. And boy were there some big planes. But there was so many. I think I ended up taking about 200 photo's of all the planes and rather than put all the pictures up here - god know's I'd get bored - I'm just going to select my favourites... 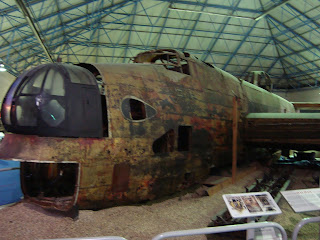 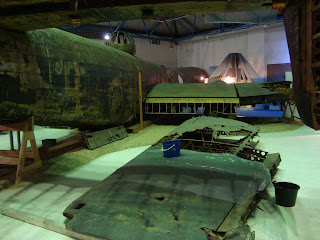 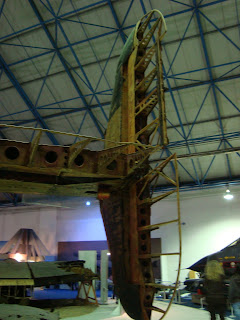 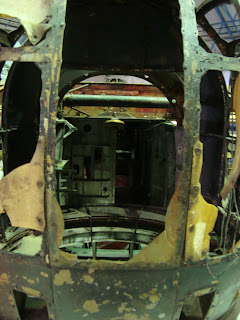 The plane above is of a sunken Halifax Bomber. It was excavated from Noway in the 1970's and considering it was under water for so long it's in pretty good  condition! 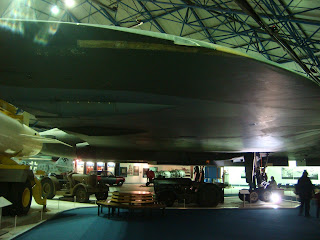 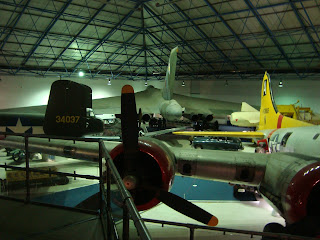 This is a Vulcan Bomber... fricking massive. Look at the wing span on that bad boy! Ok, wing span isn't the right word, but you know what I mean. I would hate to see that coming towards me!

There was another hangar attached to this one that we visited next, it had lots of more modern planes and helicopters as well as some plans that could land on water and a fire engine and ambulance that was used in the second world war.

The one thing that really did get my attention was this... 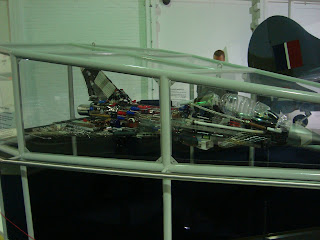 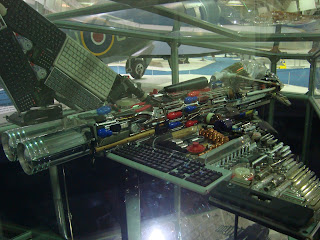 Anyone remember it? It was used in an RAF promotional advert from about 5 years ago. Have a look at the video below for a refresher.


@paktographer and I finally managed to find @londonfox and @chrisnotwell, which was good as I was fearful we might have lost them forever. We then walked through the gift shop (where I brought an excellent book on the Blitz for a bargain price) and went to another hangar across the car park. 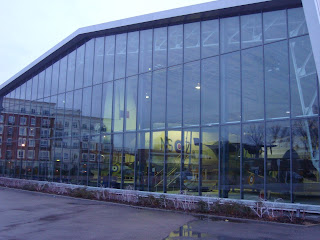 This hangar was dedicated to the second world war. Excellent. Probably my favourite historical time. Pretty much as soon as you walk in, there is a screen showing clips from a D-Day film from the 1960's (ashamedly I can't remember what it was called) and the very famous words of Winston Churchill below; 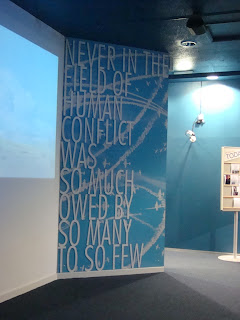 Not long after we got in there was a film showing about the Blitz, it was very well done as we were sitting quite high up, the film was shown in front of us and the planes in the background were all lit up and they had a very good scene of London in the background. 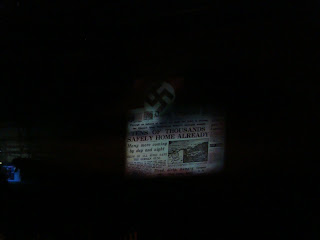 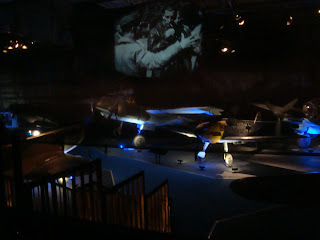 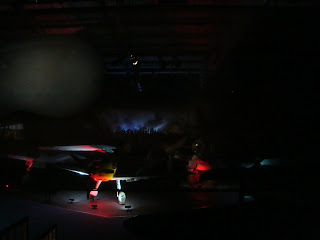 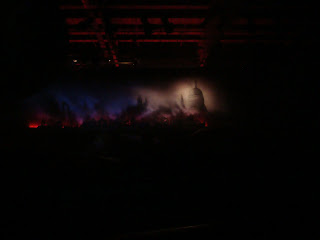 Wasn't a long show, but enjoyable. I had no idea the planes were all going to light up like that did, quite interactive I guess. Once the show was over were were able to have a look around the planes before we went to look at the remainder of that part of the museum and the big plane you could see from outside.


Ladies and gents, I present you with the Sunderland... 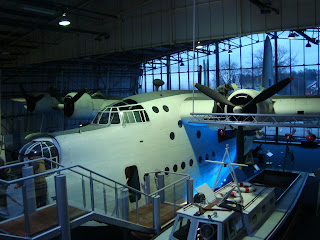 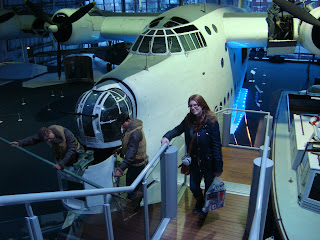 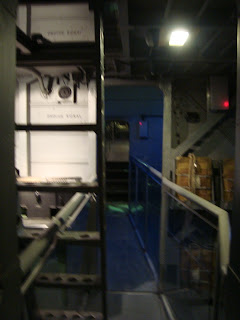 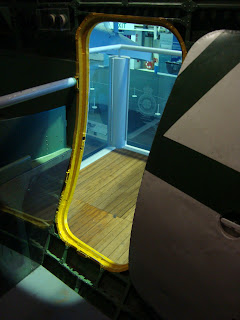 This was the last remaining flying-boat used by the RAF and was in front line service for over 20 years. You were able to walk through it with it's tiny doors and narrow corridors.

And once we had finished exploring this plane, it was almost 6pm and the museum was closing. We'd been there since 1pm and still didn't have time to do another section of the museum about the first world war.

A very interesting place, and if you are even a tiny little bit interested in planes it's a cool place to visit. There are also simulators and a 4D film show but we just ran out of time. I may have to do a revisit at some point.

The Royal Air Force Museum is based at Hendon in North West London. You can get the northern line to Colindale and it's a 10 minute walk from the station. You can find out all the details at their website http://www.rafmuseum.org.uk/london/ and they are on Twitter @rafmuseum and you can like them on Facebook too.
Posted by Unknown at Monday, March 12, 2012