Remember when I went to the Emirates Stadium in June for a Coldplay gig? What do you mean no! Well, if you don't you can find that post here. Anyway... I tried to palm it off as one of my 1000 things to do, but let's be honest... it's not really! So as part of my 30th birthday pressie from @londonfox and @chrisnotwell, I got a voucher to do a tour of Wembley Stadium. Yay, something actually that is part of my book. This really is an proper tick off now. Now sadly as it was only for 2 people, @chrisnotwell had to spend this one at home while @londonfox and I went and did a tour of the home of football. 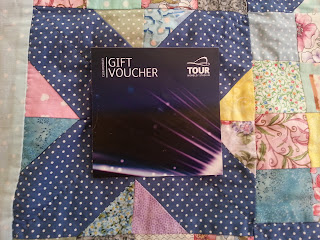 So on Sunday, 25th November 2012, off we went to North West London. Our tour was for 1.30pm, but we got there pretty early so we had a slow walk down what we all refer to as Wembley Way, but is officially known as Olympic Way. I gotta admit, I was a big fan of the old stadium with the twin towers, but the new stadium does still look pretty darn cool. 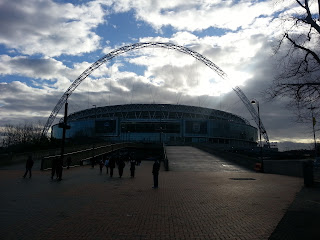 The main entrance for the tour is through the Bobby Moore entrance, hard to miss as it has a massive statue of Sir Bobby Moore (England legend). 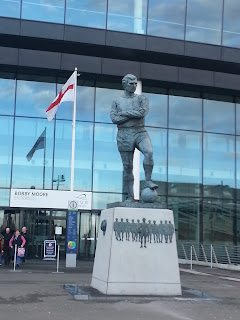 Once we’d swapped the voucher for a ticket, the ticket then got us a hangy thingy showing our start time and we went and sat in the Crossbar Reception (basically a little café at Wembley prices!) while we waited for our tour guide to come get us. The was a few bits to look at in there including a model of the old stadium, a TV screen showing some of the major events held at the new and old Wembley (including the 1933 Speedway World Championship!!) and probably the most cool thing in there, one of the original crossbars from the 1966 World Cup Final between England and West Germany. 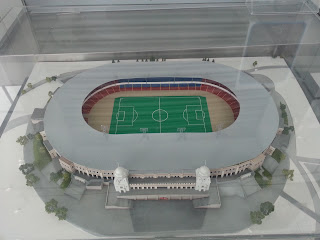 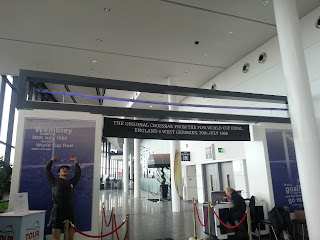 Soon enough it was 1.30pm and our tour guide arrived to take us on the magical mystery tour that is Wembley Stadium! Our guide was call Dominic and he was a brilliant.

We took an escalator up to the next floor, where we were greeted with the original flag of the 1948 Olympic Games that was hung from one of the twin towers. Now, I have yet to write up my blogs from during the Olympics from 2012, but let’s just say that they were quite possibly the best 2 months of my life. Ever. So I was very excited by this flag from the 2nd time we had hosted the games. 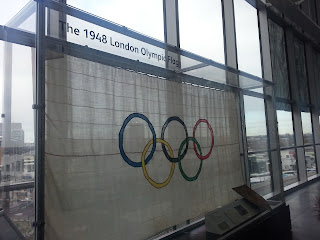 Next we walked through to the seating area itself, but not before standing in the warm for a little longer where we found out some pretty cool facts about the Stadium. I won’t spoilt it too much for you, but there are 3 pretty cool (albeit also kinda strange) world records that the stadium holds.

After that we went outside to take a seat (every seat in the stadium has more leg room than the old Royal Box did in the old stadium. And they’re pretty comfy), and we had a pretty decent view too… 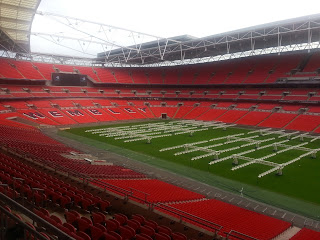 So Dominic then carried on with his cool information about the stadium. He explained about the architecture of the building, including the arch (which takes the full weight of the northside of the roof and 60% of the southside) and I shouldn’t say too much cos it’ll spoil it for when you go on the tour, but I have to tell you this fact because it’s pretty cool… you could role the London Eye under the arch if you so wished, that’s how high it is! See, cool huh? Not that you could role it under… but you know what I mean. 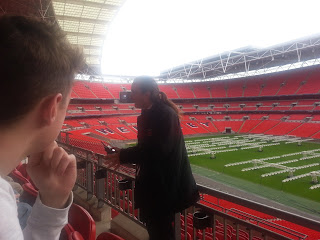 He also went on to talk about the acoustics of the stadium, and we even had a little bit of audience participation too - considering there was only 22 of us in our group we made a lot of noise! We then got to have a pic or two if we wanted. 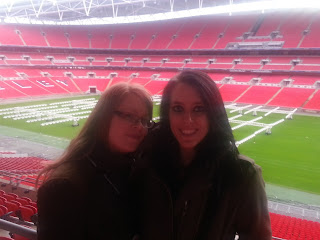 Then time to move on… we went back in the way we came out and had a nosey at the Royal Restaurant – where when footie is played both teams are invited to eat afterwards, but by tradition only the winning team actually do – and then we got to walk down the Royal Steps… and holy moo there was a lot of them!!!

Eventually we got to the bottom and went to the next part of our tour – the press conference room. Not the place you wanna be when you’re team has lost (like when Rotherham lost to my mighty Dagenham and Redbridge in the League 2 play-off final in 2010) or when you win – an awesome place to be. 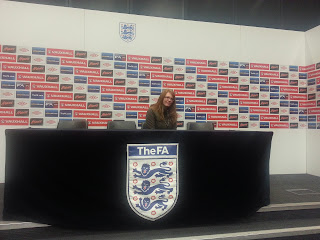 Now onto the probably my favourite part of the tour – snooping around in the changing rooms :¬) Including the England one! The first one we went into was just a bog standard normal changing room. Lockers and a small kitchenette. They had a few international football team shirts up such as Barcelona, and most excitingly for me – @teamGB Olympic ones! 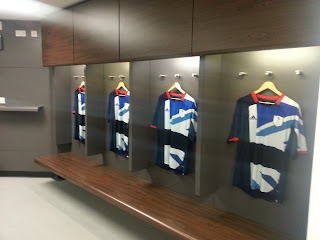 From here we then went onto the England changing room. 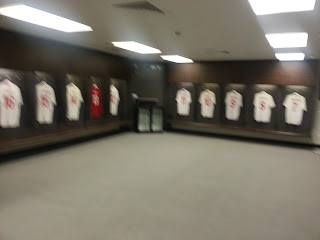 As you can see from the pic above it’s blurry :-( Actually a completely gutted about that. I was one of the first ones in there and I tried to take a pic of the room empty… but I rushed and it blurred… but you get the idea! This room was bigger than the previous changing room and had quite an extensive recovery/massage area, full kitchen, two baths, a spa type bath and a whole lotta showers.

I of course had to have my pic taken against the Arsenal players shirts… Walcott’s and Wiltshire's. 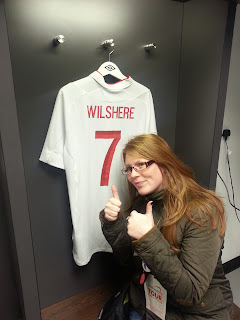 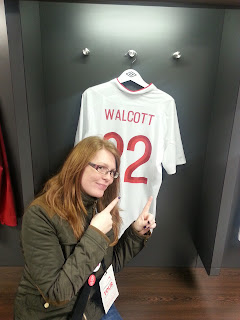 I also had my pic taken with the Ashley Cole shirt, but there may or may not be some profanities on my part in this picture so it’s not fair for you all to see (but he’s a money grabbing so and so, so of course the shirt deserved it!). 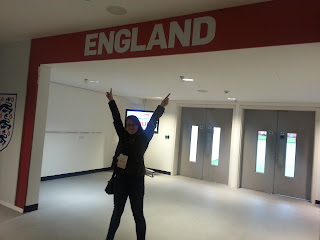 In this holding room, where the teams line up before coming out of the tunnel, there are number of England legends on the wall such as Sir Bobby Moore, David Beckham, Kevin Keegan (with a totally awesome 80s perm), John Barnes etc… And a bust of Sir Alf Ramsey to finish it off at the back of the room. 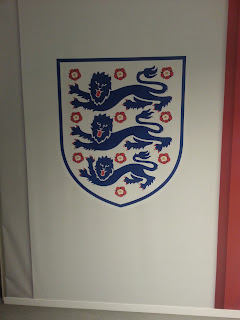 We were then told to form two line – they happened to be England and West Germany in our cases – and it was time to walk out of the tunnel onto the pitch. AWESOME. As you walk out they play audio of screaming fans and it’s a pretty epic experience – and ours is all fake. Imagine what it’d be like to be a footballer. Hairs on the back of your neck kinda stuff. 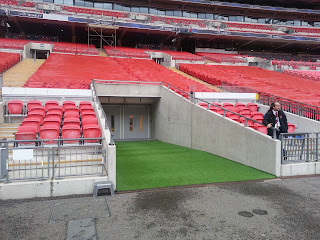 After a few pics, it was time to walk up the trophy winners steps and go get our hands on the FA Cup! Ok, not the real FA Cup, it was on a replica. Still £70k worth of replica!! Now in the old Wembley, there was a whole 39 steps. At the new stadium, there is 107! Sod climbing up all them after you’ve just played 90mins (possibly longer with extra time), we were knackered and all we’d done is a little walk! 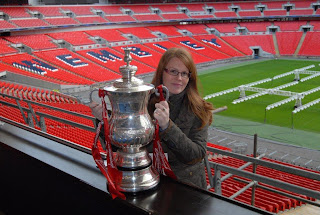 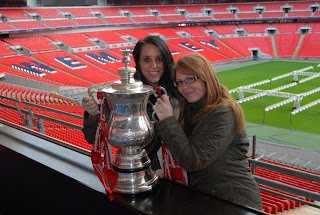 These are the official photo’s – you weren’t allowed to take any photos in the royal box. But they weren’t over expensive, we got 3 pics and downloads of them for £20. Not too bad in this day and age.

After these pics were taken, we got to have a seat in the Royal Box. I made full advantage of being in here as I ain’t ever gonna get the chance to be in there again! Although the tickets are free… you just have to be invited! Can’t see Prince William inviting me any time soon though sadly. Sigh. I did have a little touch of his chair though, ah come on – he’d sat there! How could I not?!?!??

Time to go back inside now where the tour was about to be wrapped up. It finished outside the Bobby Moore Restaurant (which happens to be the biggest in Europe) where they also had a display of all the winners of the Champions League finals – where I found out an English team won the year I was born. Go Aston Villa!

And that was it. Tour over.

All in all, it lasted just over an hour, and although I was a little sceptical when arriving, I actually really enjoyed it. I think a lot of that had to do with the fact that our guide was so good. He had lots of facts and figures – not all sport related – and he was able to interact with the group he was with. So thanks Dominic, you made the tour for us!

Because we had a voucher, it didn’t cost us didly squat for the tour (although we brought the photos), but the tour does cost £16 a person to do. Would I recommend it? Yeah I would. It’s one of those things that I wouldn’t wanna shed £16 out on, but now that I’ve done it, it’d say it’d be worth doing too for the money. You don’t have to be a sporting buff (although it probably helps) to be able to enjoy it.

They do tours every hour pretty much on non event days. You can book tours via the Wembley website http://www.wembleystadium.com/Wembley-Tours.aspx although you do have to book them through ticketmaster… never ideal! Think you can also turn up on the day if you wanna take a chance.

All that’s left to say is a big thanks to @londonfox and @chrisnotwell – was an awesome birthday pressie :¬)
Posted by Unknown at Tuesday, November 27, 2012