Drink at The French House


So next stop on our whistle stop Chinese New Year pub crawl (we'd already done De Hems and the Coach & Horses), was the French House. Another appropriate pub for Chinese New Year! 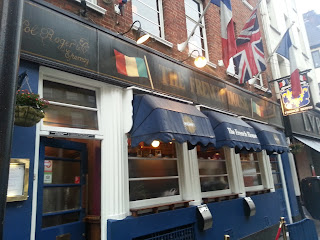 Now both books mention going to the French House on Bastille Day, but seeing as that's on 14th July, I failed miserably! But as I already have plans for that day, so why not go now? So that's exactly what we did.

It's quite a small pub, but does have 2 floors. 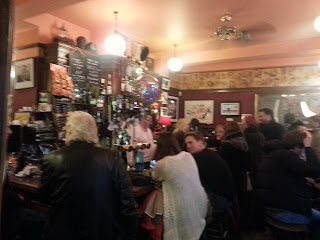 Ok, so this pub might be in England, but it refuses to fall into our English ways and serve in pint glasses, so halves it was. And also being very French (and @londonfox's round), it was the most expensive of the rounds so far! But we all had a glass of the house lager (French of course), Meteor. The pub is probably better known for wine and Champagne though than beer. 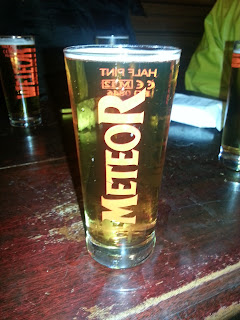 Much like De Hems, it was during the Second World War that this pub became popular with French soldiers and then changed it's name from The York Minster to the French House.

Since then this place has been attracting a mix of artists ad writers - including Dylan Thomas. I wasn't really taking that much notice at the time, but after reading their website and thinking about it logically now, I can see why this little place attracts that sort of crowd - it has no music, no TV, no machines and probably most uniquely, no mobile phones! I had no idea about the last rule as I took the photo's with my phone, but I'm sure they mean to speak on them rather than use them to take photo's for a blog... I hope... yikes.

Food is served here too, French obviously, but only till 4pm.