So yesterday was Chinese New Year again and as we had a good time last year (can have a look at my blog post for that here), myself along with the usual crew, @londonfox, @christnotwell and newbie to this crazy 1000 things idea of mine @DChristie83 all pottered up to Trafalgar Square/Chinatown. Where this was pretty much our view everywhere... umbrellas. Sigh 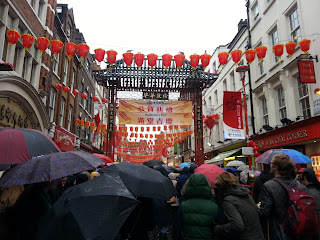 Last year was very cold, but this Chinese New Year not only had cold, but also lots of rain and bitter winds. So we lasted about 15 minutes wondering around before figuring out what else to do? Go to a Dutch pub obviously! 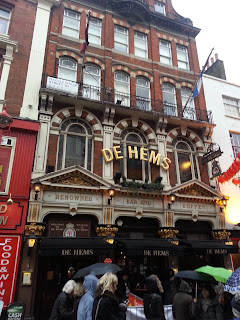 Because @londonfox is so good at planning, I'd emailed her a list of all the pubs that are in my books so she could organise some pub crawls for when we visit some other things in the book. And today was our first pub crawl. First point of call... De Hems.

De Hems is a pub based on the edge of Chinatown, on Macclesfield Street. This pub is based on two floors and has a hundred year or so of history. Originally a place for Dutch soldiers to come and eat oysters, then during the Second World War it became a rallying point for the Dutch Resistance (and everyone loves a bit of war history!).

Was my first time in there, and I was pleasantly impressed. They have a fantastic range of Dutch beers and also those of the Low Countries, namely Belgium, Luxembourg, Northen France and Western Germany. @christnotwell and I had some Dutch Lindeboom while @londonfox and @DChristie83 went for Belgium fruit beer Fruli. 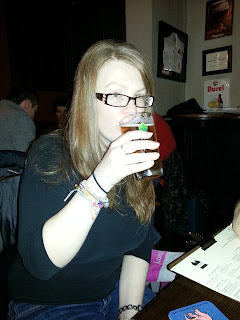 As well as selling lots of beer, they also do traditional Dutch food which looked lovely - we'd had a massive breakfast before we made our way up town so food was off the menu. So to speak. Ahem. All the signs are also both in Dutch and English which is pretty cool.

Also, I read on Wiki (so we don't actually know how true it is), that this is where the Mighty Boosh made their debut when they used to have a comedy club there. A pretty good claim to fame.

I'd definitely like to come back here and try more of the different beers and the food too. Maybe when the national football team is playing... although I think it'd be mentally busy somehow although would be a fantastic atmosphere! Is a pub I'd recommend coming to visit if you happen to be in the Chinatown/Soho area.

De Hems is at 11 Macclesfield Street, W1D 5BW and is part of the Nicholson's Pub group.
Posted by Unknown at Monday, February 11, 2013