So on Saturday just gone, 16th February 2013, myself along with @londonfox and @chrisnotwell popped on the bus and headed to the Waterloo area for the day. I wanted to pop to Lower Marsh and the other two decided to join me and as @londonfox has devised a number of pub crawls from the list I sent here, we added some of them to this too!

Once off the bus at York Street, we walked down a road called Leake Street. 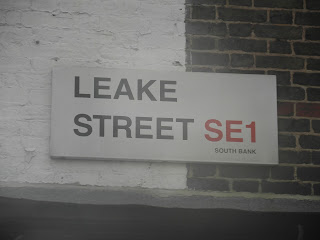 It's basically a 200-ish meter tunnel connecting York Street to Lower Marsh that goes directly underneath the platforms at Waterloo Station. I'll be honest, it doesn't look all that great to look at (bit of a dodgy alleyway to most people) but what it does have is street art all the way from one end to the other. 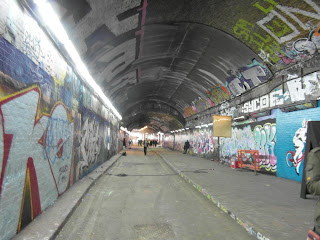 Originally this tunnel was owned by Eurostar when the trains ran from Waterloo before moving to Kings Cross St. Pancreas at the end of 2008. In August of that year, probably the most famous street artist, Banksy, held a "Cans" festival where groups of artists from all over the world descended on this derelict tunnel and covered it with their artwork. The rest as they say is history... oh, and it's all completely legal.

As soon as we arrived at the tunnel we could smell the spray paint cans, me personally I love that smell (like sniffing a permanent marker, which obviously I'd never do... ahem), but after a few mins it was giving @londonfox a slight headache. There were a few people there doing their artwork as we walked though. And even some sort of film crew down there. 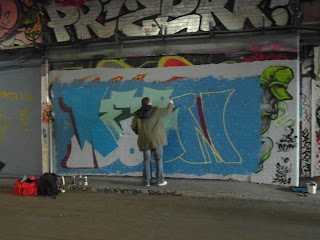 Ok, so there was some rubbish tags and normal graffiti, but in the majority there was some really good artwork down there. By all accounts, every couple of weeks the walls are painted over again so that another artist can come down and make their art known. My favourite off all the wall pieces was this one... 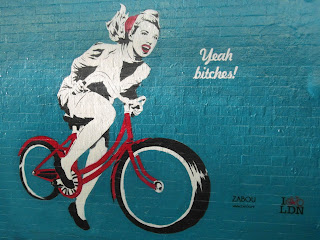 Pretty cool and apt for me (and @londonfox) being women cyclists :) Although I in no way look cool like that when I'm cycling!

Just after this, there was a guy standing outside an open door into one of the arches telling us about a free art exhibition going on. Quite intrigued, we decided to go in and have a look. This place is called the Vault (part of the Old Vic Tunnels) and was a maze of interlinking tunnels/rooms filled with artwork and sculptures by an artist called @DavidBreuerWeil and the collection was called Project 4.  There are 87 pieces altogether under different sections, Aspiration, Community, Commodification, Itinerancy and Continuity. These were my favourite pieces...
Am very glad we popped in there, the artwork was fantastic! If any of you find yourself in the Waterloo area in the next few weeks, I highly recommend popping down the strange alleyway that Leake Street looks and pop into the Vaults to have a look at this exhibition. It's on until 1st March 2013 and is free!