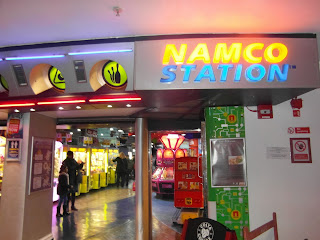 Ok, so this is in all 3 of the books... a fairly popular place obviously!

As @londonfox and I had dragged @chrisnotwell around the shops all day (to be fair, we had given him booze!), our bribing material was to come here. I've been here a few times with my work, and so I *might* have had a few tokens left over from our times here, so that was as good enough incentive to come (thanks work!).


When we arrived, we headed downstairs and had a go on a few of the games, starting off with the Need for Speed racing game. @chrisnotwell and I both lost in the first round. @londonfox however won her game... and the next 5 or so. So off @chrisnotwell and I went to go play some air hockey - my favorite arcade game of all time (well, along with the 2p machine) and I'm happy to say that I whipped his behind 7-4. Go @tadders! After this mighty win of mine, we popped back over to @londonfox who was still playing on the stupid racing game. As I said in my Hole in the Wall blog... mispent youth! We were quite bored of this by now, so we abandoned her and went upstairs to find a game we could play.

Then we came across a 2 player game where we get to shoot zombie skeletons, and use a ships wheel. Awesome. @londofox eventually finished her racing game and came up and found us. It was now time for her to be ignored while we played :) 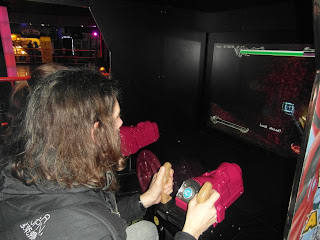 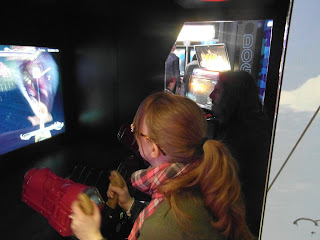 We were there for quite some while, and eventually after about the 5th continuation, we decided to move on to something all 3 of us could do… DODGEMS! 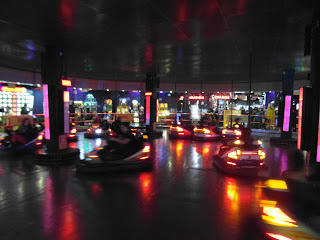 All 3 books mention to come here for one thing and that is the mighty dodgems. So we all took a token each, went off into three different directions and sat in our cars.

There was a fairly big group of people including a couple of little kiddies, not like toddlers more early teens, so apart from @londonfox and @chrisnotwell being my targets – they were too. Cue evil laugh… mwahahahahaahaahahahah! Hey, they were gunning for all of us, so it’s only fair they get it back… life lessons and all that :)

I’d forgotten just how much fun dodgems are.

Once we’d finished our go, @londonfox was desperate to go on one of the dance machines. So we went on the nearest one to where we were, dumped our coats and bags for @chrisnotwell to look after and we went dancing. The machine was rubbish. Had weird Japanese dance music we had never heard of… so off we went to find the old school dance machine. Which we did downstairs.

After a quick alcoholic beverage (playing games really takes it out of you!), we wondered over to the dance machine. Boo… some couple were already on it. So I challenged @londonfox to a game of air hockey. 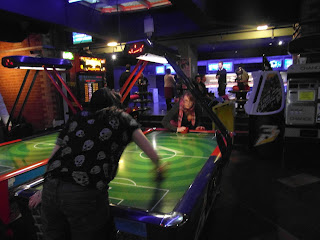 After winning 6-3, I ended up losing 6-7 and promptly sulked. Grr. This was meant to be my game!!

I didn’t have much time to sulk as soon the other couple went off the machine and it was our turn. Oh dear. I am truly terrible at this. It appears I have absolutely NO coordination whatsoever. 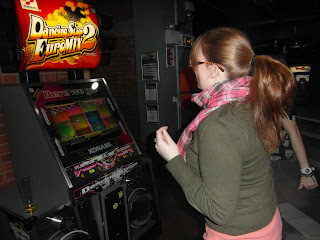 We had 3 rounds, they were all fast. We started off with 5, 6, 7, 8 by the awesome Steps, I thought I’d have been able to do that as I know the routine off by heart… but not on this version… I was a mess. Then we did Cotton Eye Joe, and I was awful at this too. The 3rd song was one I had never heard of and was ridiculously fast. So fast. @londonfox tried to keep to the instructions, but me? Nope, I’d given up and just spent the entire song jumping about like a loon. Pretty sure most people around thought I was a bit mad… at least I made @chrisnotwell laugh! 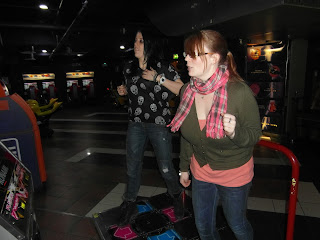 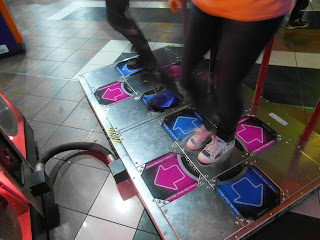 In the book, you're meant to come and watch the pro's dance on the machine .. I think we (well I) took that one stage further and became much more than a pro, I be came an entertainer!

We had one more blast on the dodgems and then it was time to go home. We were pooped and ready for a big fat Indian when we got back nearer home.

As I had these tokens already, it was a very cheap night for us. Each silver token is worth £1 and the gold token for the dodgems are worth £3 each. So it can turn out to be a costly time if you're going as a family, but it is such good fun. All machines take cash, mainly 50p or £1 a go and the majority take the tokens. There is also bowling and pool tables there too so loads and loads to choose from.

Namco is based at in County Hall right by the London Eye. For a full list of the bits they have there have a look at their website. County Hall is on Westminster Bridge Road, London SE1 7PB.
Posted by Unknown at Tuesday, February 19, 2013