Next in our Chinese New Year pub crawl we had planned to go a pub called The Endurance, but what none of us checked was whether it was open on a Sunday... I mean, it's Sunday in London, of course it would be open. It wasn't. So what to do? @christnotwell had a gig in Islington that evening, we decided to all go there for a drink somewhere and then eat some Chinese food - well it was Chinese New Year after all!

So the next pub on our crawl was theatre pub, the Old Red Lion Theatre in Angel, Islington. 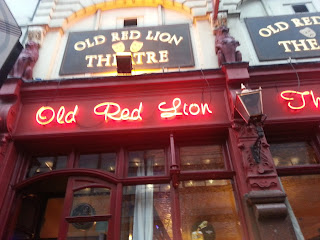 Ok, so because this was an unexpected stop off, we didn't do what the book wants us to do - watch a play and have a pint. We just had to settle for the booze.

The pub is downstairs and the theatre is upstairs. The pub is to me very much an old man's pub, but that is fine by me as that's my kinda pub to be honest.

The Old Red Lion Theatre is somewhere I have been to before though for a show with a couple of other friends. The theatre is tiny, and houses an audience of about 20 people I think, so does get quite cosy (not to mention very very warm), if you do end up going there don't wear too many layers!)*

The Old Red Lion Theatre is at 418 St John Street, London EC1V 4NJ. You don't have to come watch a play here, but it's fairly cheap to do (tickets are roughly about £15). Have a look at their website and see if anything takes your fancy - I have just had a butchers I'm liking the idea of The Play That Goes Wrong. Quite interested in seeing this, so hopefully I can rope some people to come with me, if not, I'll come back on my own! I'll then be able to do a part 2 to this and do what the book wants me too... They are also on Twitter too @ORLTheatre.

*UPDATE - I have since heard from @ORLTheatre and they hold an audience of 60 people (quite a bit more than my 20!) and they now have air con! Awesome!
Posted by Unknown at Friday, February 15, 2013