So one day in early December last year my phone beeped and I got an email. Not overly interesting I hear you all say, BUT, it was a newsletter from @SE16 telling me that the Shard (@shardview) were giving away 4000 free tickets to London Borough of Southwark residents before it officially opens to the public. Awesome...


There was one catch though however, I had to be outside Canada Water Library at 7.45am on 19th December 2012 to get tickets on a first come first serve basis. Ordinarily this wouldn't be a problem, as it was a Wednesday and I'd be going to work anyway... but this particular Wednesday was the day after seeing Prodigy at Brixton the night before and I didn't get to bed till about 3.30am... and I had booked the morning off to get some sleep. Not ideal... but anywho, I got up and trundled along to the the library and managed to get myself 4 of these beauties :) 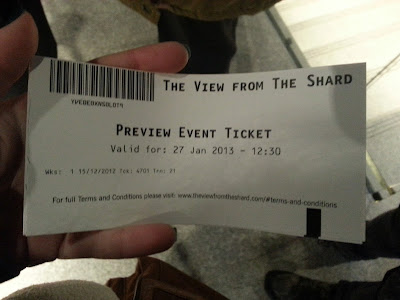 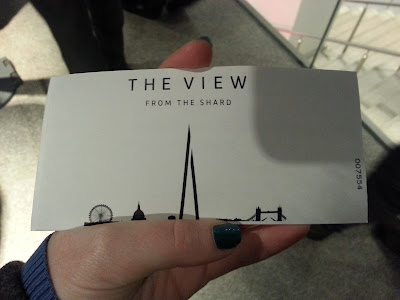 So on a (thankfully) sunny and fairly clear 27th January 2013, myself along with @londonfox, @chrisnotwell and @Kelly_79_ took ourselves off to London Bridge to go up the Shard. EXCITING!! 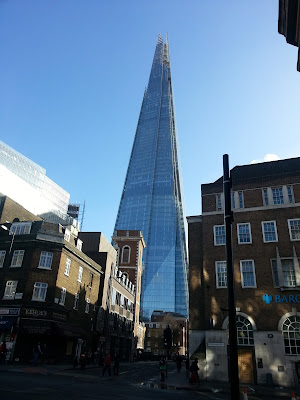 The tickets had a specific time on them, and we got there pretty much dead on 12.30pm. It did however then take us over 30 minutes to get to the lift to take us up the building. I can understand there being a bit of a wait, but that was quite a while. We spoke with one of the workers there, who said that the day we went was the busiest they'd had so far on the preview days and that they were going to learn from this for when the Shard officially opened to the public on 1st February. Let's hope they did :)


Once we'd been through the security checks, and had our cheesy photo done where they'd superimpose us onto a backdrop of the city (which by the way they wanted £20 for! Ouch), we finally made our way to the two lifts needed to get to the top. First lift took you to floor 33, and the second one took us up to floor 68... 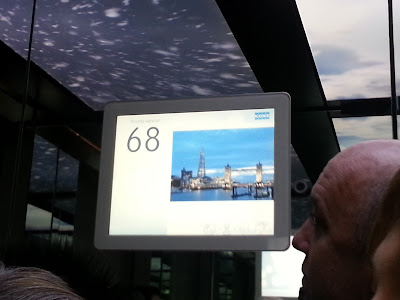 
Floor 69 is all inside, and you get to walk around it completely, 360 degrees. You can go higher to the 71st floor, but there is no lift so you have to walk 2 storeys. Well I say there is no lift, as we had to walk it, but there was another lift from the 68th to 69th floor so it's possible there is one from the 69th to 71st and I just took no notice! Be warned, the 71st floor is "open" and when it's windy (which it was when we went up), boy can you hear it. You also can't walk round it 360 at the moment as one corner is cornerd off.
I could have stayed up there all day quite frankly, staring over the beautiful city that is London. You don't realise what a small city height wise London is. We think we have big buildings like the Gherkin, the London Eye, Canary Wharf and other buildings in the vicinity, but in comparison to the Shard and places like NYC... we are tiny.

Here are some of my favourite views...

But it was very windy, and very busy, so after about an hour we made our way back down to the bottom. Not before a quick group photo obviously!


So we wondered back down the stairs to the 68th floor, to jump in the two lifts needed to get us back down to the ground (and reality!)

Ok... so my two pennies worth of thoughts on the Shard. The experience is awesome and the staff were all really friendly, and on a clear day (or night) I would highly recommend going to see London in a whole new light. BUT, I think £25 in advance and £30 on the day for an adult is incredibly expensive for what it is. If you book in advance you have no guarantee of what the weather will be like, and if you get a day of low cloud/rain... pretty pointless. I really want to go back at night, as I think London looks it's most beautiful at night, but I think I'll wait for some offers to come out... if they ever will.

Nonetheless, if you can go, I would. The website for the shard can be found here, and it's pretty much right next to London Bridge Station - hardly a building you can miss!
Posted by Unknown at Wednesday, February 06, 2013

Email ThisBlogThis!Share to TwitterShare to FacebookShare to Pinterest
Labels: London, The Shard, View from the Shard
Location: The View from The Shard, Joiner Street, London SE1, United Kingdom