Every year I say that I am going to celebrate St Patrick's Day (nope, I'm not in anyway Irish) and I never do. This year I was determined to go into Central London and take part in some of the festivities.

So I popped on a bus and headed for Trafalgar Square... 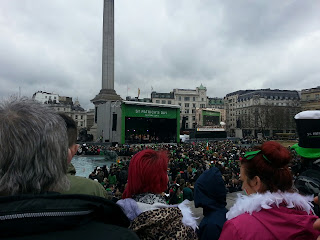 I was only there for about 10 minutes as just after this photo was taken the heavens opened! Plus it was very very busy. But I did stay long enough to have a little dance (in the rain) to some live music played by some students of a music academy, including some banjo solos which were awesome :)

Anyhoo... after standing in the rain for 10 minutes and having about 5 prams try and go straight though me (buggies should totally be banned from public places!), I decided to take myself off to find the oldest Irish pub in London... 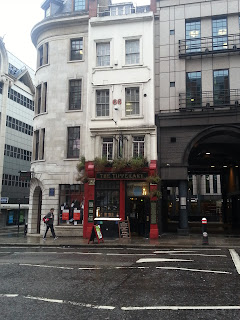 The Tipperary. This pub is recommended in the TOLTOL book for a drink on St Patrick's Day and what a good choice it was! 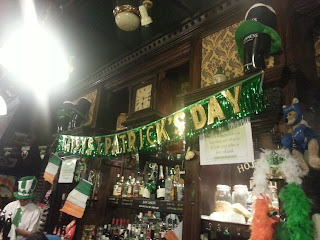 This is a very small pub, very narrow but quite long, and is on 2 levels. Being that it is St Patrick's Day and that the pub is very small... it was also very busy!

So I snuck my way to the front of the bar and ordered myself half a Guinness. Nothing too out of the ordinary I hear you all say, Guinness and Ireland go hand in hand, except for the fact it's a drink that I've never liked. But you know, everyone else was drinking it so I thought I should too... although I could have had some Magners cider thinking about it now. Ah well! 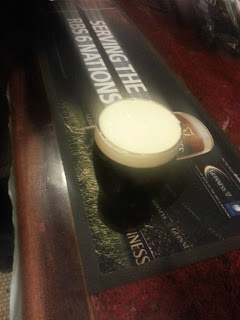 There it is... my half a Guinness. Which you know what? I actually quite liked! Who'd have thought it. Certainly not me that's for sure! 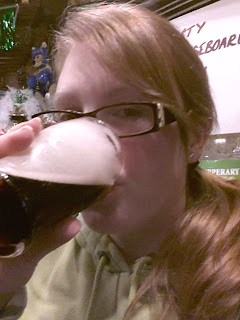 Although I must admit, although I did like the first one, the second one I had blackcurrant in and enjoyed it much more.

The staff here were so friendly too. I was on my own, and I did have a couple of chats with the staff behind the bar - and I even got given a free Guinness (think they must have felt sorry for me!). So I popped in for 1 that I didn't even like and ended up having 3 :) 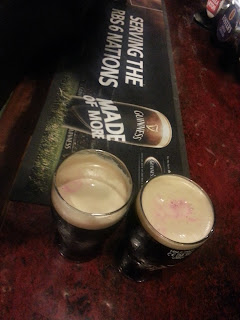 As I said, it's a small narrow pub, and it's very Irish without being tacky like some Irish pubs and chains such as O'Neills. Ok, so it was a little tacky today, but that's only because of it being St Paddy's Day. It has two large mirrors imprinted, one about whiskey and one about stout. It also has clovers mosaic tiles along the bar. Looks very nice :) 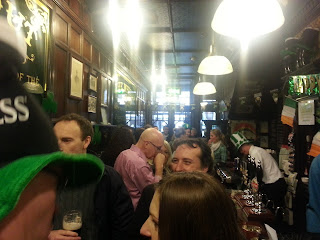 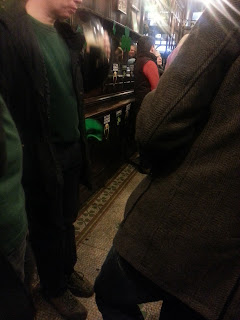 So after my 3rd Guinness I was feeling decidedly squiffy, and thought it was time to head home. But this is definitely one little pub I will come back to (and bring @londonfox and @chrisnotwell too as they missed out on it today) when it's not so busy. The drinks were reasonably priced considering it's in the heart of the city, and friendly staff really enhance this awesome little pub.

I went in this pub to tick off another box from my books, discovered an awesome little pub and realised that I do actualy like Guinness. A real surprise considering I tried a sip of it when we went to the Crown & Cushion pub a few weeks ago and hated it! So thank you Saint Patrick for making me realise it is actually a nice drink to have :)

The Tipperary pub is based at 66 Fleet Street, London EC4Y 1HT. If you ever find yourself in the city, and fancy a drink, I highly recommend popping in here. I want to come back for sure. Like right now. But it's closed now so I can't... so until next time.