Back in early February I popped into the Old Red Lion Theatre with @londonfox, @chrisnotwell and @DChristie83 as part of our Chinese New Year pub crawl. As we hadn't planned on popping into the @ORLTheatre that day, we weren't able to do what the book requests - have a pint and watch a performance. This means I had to come back to watch a show... 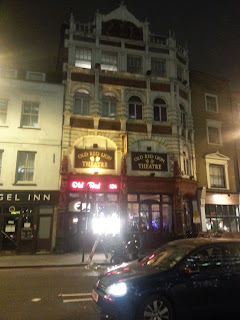 So on Thursday, 28th March 2013, myself along with @londonfox, @chrisnotwell and @DChristie83 went back to the @ORLTheatre to watch "The Play That Goes Wrong". 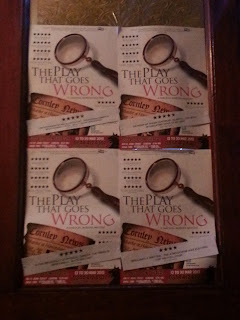 Now you might remember the inside photo of the pub from my previous entry, there was rugby on so the big screen to project it onto was down, so you weren't able to see the full pub. On Thursday night I was able to take a picture of the pub in its full glory... 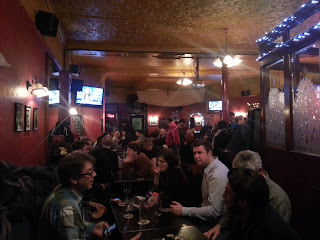 The doors opened to the theatre at 7.30pm, so off we trotted up the small narrow twisty stairs to the first floor, and handed in the reusable tickets. 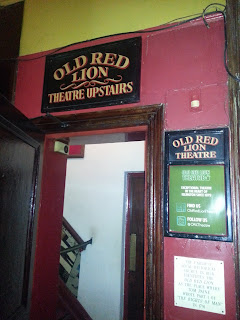 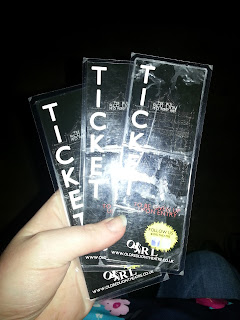 The title is pretty self explanatory, this is a play about a play that goes wrong... without giving too much away, it's about a small dramatic society putting on a murder mystery whodunit play - where things don't go quite right both on and off stage.

When you get into the theatre, the seats are in an L shape on a corner, and to get to the furthest side you basically have to walk across the stage.

This was described as a comedy play. It wasn't funny, it was hilarious. Absolutely hilarious. I must have laughed for a good 85-90% of the play. Real belly laughs where you're actually in pain where your abs hurt so much. By the time I'd left the theatre I had a very sore belly and cheeks!

The actors were so very very good. To be able to pull off some of the miss timings of things takes a lot of skill. 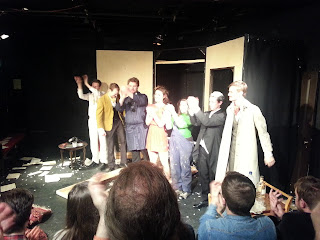 Guys you were amazing.

The show was put on by theatre company Mischief Theatre. They were brilliant and I highly highly recommend seeing them if you get the chance. Sadly we saw this show 2 days before they were about to finish a 3 week run, so you're not going to be able to see them at the @ORLTheatre now. But do keep an eye on them via twitter @mischiefimpro and via their website. I certainly will be and hoping to see more of their shows in the future.

So I am glad to say that I was able to come back and do this entry properly. Have seen two plays here now and both have been very good. Tickets are very reasonable, the ticket for this show was only £15 and not many places you can get a good night out for that kinda money.

If you get the chance, keep an eye out on what shows the @ORLTheatre are putting on (this is their website) and come have yourself a visit. They're based at 418 St John Street, London EC1V 4NJ, which is just a 5 minute walk from Angel tube.
Posted by Unknown at Sunday, March 31, 2013