Now as well as being thoroughly spoilt by @londonfox and @chrisnotwell at @vertigo42bar drinking champagne on 26th April 2013, I had the choice of food too. We could either have eaten at the Gary Rhodes restaurant at Tower 42 or go to Gaucho... I clearly chose Gaucho! 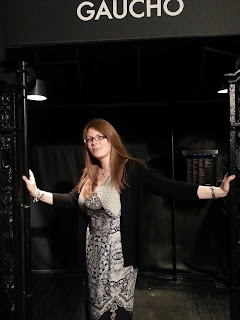 There is a few reasons for this... 1) it's in my 1000 things list 2) the food at Gary Rhodes was very pub-ish food for the ridiculous price and 3) I'd never been to Gaucho and I'd heard amazing things about the food. Easy choice really!

@londonfox has booked a table at Gaucho's City restaurant - a building which used to hold the gold for the Bank of England. How apt.

As you all should know, Gaucho is known for it's delicious Argentinian beef, so the decor of the Gaucho restaurants are all very cow related. Hides on the walls, on the chairs etc... I used to think it was a bit too much cow stuff, and then I went inside and couldn't help but stroke the walls... and chairs. Am glad to say that it is all much more tasteful than I had previously thought. 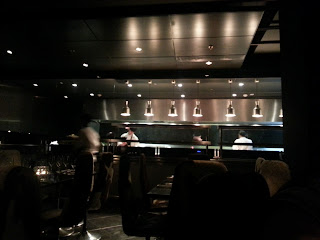 Now onto the reason we came here... food!

We sat down, ordered our drinks (I had a very tasty cocktail called Patagonian Cobbler, @londonfox and @chrisnotwell shared a bottle of red wine as they are far more sophisticated than me!) and our lovely waitress (who we randomly saw at a real food festival a week or so later) came over with a board full of meat to explain the different cuts, what they recommend go with them and general information about the food. 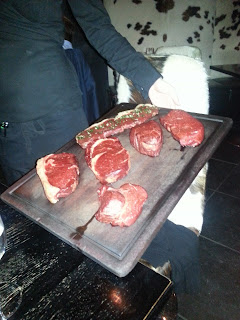 So I was slightly embarrassed to take photo's in Gaucho so when she originally came over I didn't take a photo of the meat. But a little while later we got talking to her, explained about my blog and she came back over with the meat tray so I could take a pic of it. So we can all pretend that this was taken the first time ok? Not sure why I didn't just pretend anyway... hmmm.

We decided to share a starter between us and went for a sausage platter... this consisted of Argentine chorizo, chorizo picante, pinchos and morcilla. I'll be honest, apart from chorizo I have no idea what the other sausages were... but they were really tasty. 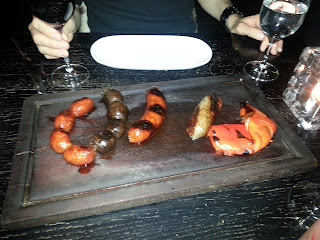 For main I went for fish.

Only joking! You can't come to a steak restaurant and not eat beef. That would be absurd! Unless you're a veggie then you are exempt. Obviously. Although, what the hell are you doing in Gaucho if you're a veggie?!?!

My main was a special cut called Entrana Fina, which was succulent marbled skirt marinated in garlic, parsley, olive oil and something called aji molido which I have no idea what it is. Went for medium-rare and I'm not a fan of eating beef that is still mooing... medium-rare I can deal with as long as there is sauce to hide the blood! 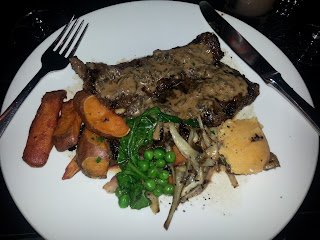 We had sides of sweet potato chips, peas and bacon, oyster mushrooms and a special side pureed veg of some sort that I can remember what it was... might have been sweet potato again... or butternut squash actually. Am sure @londonfox will let me know :-) 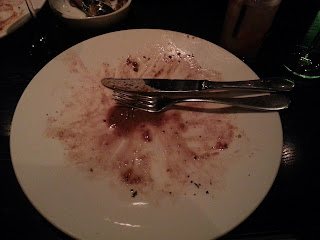 As you can see from my very empty plate it was yummy. I can absolutely see why people rate Gaucho's so much. The meat was delicious and so easy to cut with a knife (they don't give you steak knives as they are never needed!).

I'll be honest... by this point I was quite full up.

Still didn't stop us having desserts though :-) 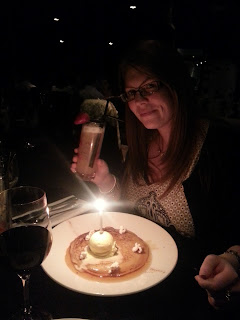 I went for apple pancakes with cinnamon, vanilla ice cream and popcorn. It was also mighty delicious. And because it was a belated birthday meal, I got a candle on it too!

So that was my Gaucho experience. And I loved every minute and mouthful of it! Another massive massive thank you to @londonfox and @chrisnotwell for spoiling me so much on this night. Truly was a fantastic 30th birthday present that I'll always remember!

I can't advise you on price as I didn't pay for anything, but it isn't cheap. Having said that, you most certainly get what you pay for as the food was divine. If you have a special occasion and you want good tasty food, I'd highly recommend Gaucho. There are loads of them all over the city (also in Manchester and Leeds too I think). Have a butchers at their website for locations, menus etc...