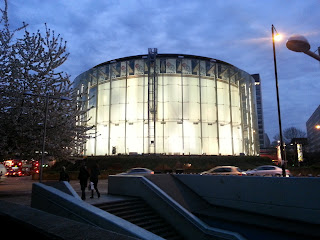 On 4th May 2013, I fulfilled something I'd wanted to do for a long time - watch a film at the BFI IMAX cinema in Waterloo.

I've been quite a cinema buff for a few years now (did 2 years of Orange Wednesday's every week, and then got a Cineworld Unlimited card which I've had for 2 years now), but I'd never seen a film at the IMAX. I'd seen films at IMAX cinema's, but not at what I felt was the home of IMAX. 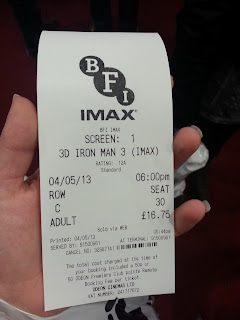 Myself along with @londonfox, @chrisnotwell and @DChristie83 went to watch Iron Man 3 with the scrumptious Robert Downy Jnr.

The screen was massive... MASSIVE. Which obviously is kinda the point.

The film was ok... Robert Downy Jnr was of course hot a Tony Stark... but it was the worst of the three Iron Man films.

I was really disappointed with the cinema though. I expected so much more from it. Although the screen was massive, I felt that you were still very close to the screen (we were also in the 3rd row which didn't help) and that it was all a bit too squashed in. I obviously realise that the cinema is in the middle of a roundabout and therefore it has to be reflected in the size of the screen, but I still came out feeling a little let down.

The ticket for the film was best part of £17 with booking fee - I'm used to paying £15 a month to see as many films as I want - and that was a lot of money for getting a stiff neck staring up at a screen I felt was right on top of  me. Maybe I'd have a better experience if I was further towards the back... or if I had enjoyed the film more. The film was in 3D and because of the size of the screen and the curve of the screen, the 3D didn't work all that well... that also added to it.

If I want to watch a film on a bigger screen in the future I'll just go to the Cineworld at the O2 and watch it on the Sky Superscreen. It isn't IMAX size but it is pretty damn close to it. Went to see the new Star Trek: Into Darkness at the Sky Superscreen and I felt much more at home!

This is obviously just my opinion. Both @londonfox and @chrisnotwell have been there 3 times now and they've enjoyed it. It just wasn't for me and I definitely won't be rushing back!

If you want to go watch a film there, you have to book via the Odeon website (they're running it on behalf of the BFI). The cinema is right next to Waterloo station - you can't miss it! But if you need the address, it's 1 Charlie Chaplin Walk, South Bank, London SE1 8XR.
Posted by Unknown at Sunday, June 02, 2013